The Outskirts, dismantling Islamophobia and Radicalism through comics

It is a role play game using character cards based on the comic “The Outskirts". The dynamics benefit from the immediacy of the visual narration helping to talk about conflicts, overcome them and share them.

•    To remove prejudices about Islam in general, and in particular about the role of women in Muslim societies.
•    To strengthen the participation and effective inclusion of these women and younger Muslim women in the social environments in which they live, strengthening their self-esteem and valuing their cultural roots.
•    To promote the concept of multiculturalism and the inclusion of Muslim communities.

This 90-minute activity is carried out in two phases.
The first phase sees a dramatized reading of the comic “The Outskirts”.
During the second phase, some of the participants are asked to act out the characters from the comic in different situations, which will be assigned to them by the leader of the activity using cards. Meanwhile the rest of the participants work in groups as observers. After the showing of the scene each group of observers will carry out a follow-up assessment which will lead into a time of evaluation that the whole group will take part in.
These are the stages of the second phase:
•    Between 6 and 8 people from the group, identified with the character cards line up facing the rest of the group, in the starting line (see annex: scene scenario)
•    Each one will adopt the personalities, beliefs and attitudes which they think their character possesses in relation to the statements that the leader of the activity will read out and perform.
•    The rest of the group, divided into as many groups as there are characters, will observe.
•    The moderator will read out the list by order of scenarios/ statements.
•    The characters will respond to the statements by stepping forwards, backwards, or by standing still in their place, depending on whether or not they agree or disagree with each one of the scenarios/ statements.
•    Once finished, each character will find themselves in a given situation compared to the other characters and to the extreme markers.
•    From this position, each observing group will present their reflections on the decisions and the attitude of their respective characters which will lead to an overall assessment and a general evaluation of the activity.

Those taking part in the game in the end should have broken down prejudices about Islam and the participation of women in Muslim societies and should have consolidated the concept of multiculturalism as a means to inclusion. If young Muslim women take part in the game, their self-esteem should have been reinforced thanks to the valuing of their cultural values during the execution of the game.

The evaluation will take part in two stages.
The first stage of the evaluation will be conducted individually through a questionnaire of closed-ended questions which each participant will complete before the dramatized reading of the comic “The Outskirts”.
The second stage of the evaluation will take place after the role play activity and after each group of observers has presented their thoughts. The questionnaire which they will have completed individually will then be discussed among the group as part of the final debate.

muestra_kifkif.JPG
Tool Fair upload:
TFXI
Rating:
0
No votes yet
Share this tool by
Add a new version of this toolTranslate this tool 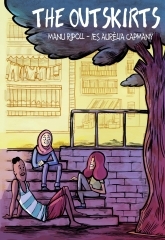 a group of at least 12 people and a maximum of 35. The group is very flexible; the activity can involve children, teenagers and adults of any sector of society.

The tool was created by
Fundación Al Fanar
in the context of (background):

The comic "The Outskirts" is the central element of the project Kifkif, comics for Inclusionis a project of direct engagement with young second generation immigrants, aimed at strengthening their participation and effective integration into the social environments in which they live, giving value to their cultural roots. Reinforcing these values as something positive and normal among the youth during a stage in which their personalities are constantly being shaped will help to separate them from those environments which exploit feelings of disorientation among the so-called second and third generations of Arab Muslims. The project seeks to operate in the form of a network that interacts with the distinct role players involved in the project’s development from their schools and town halls to their local Muslim communities, mosques, etc.