E+ C1 Manual provides educators with a step-by step description of drama-action model that is suitable for achieving educational, artistic, research, or advocacy/activism goals and working on any social schism issue and with any age group.

Educathe+ Manual is a tool based on drama-action model that was developed by sociologist dr.sc. Ivan Hromatko. The idea of developing this stems from Michael Burawoy’s call for “public sociology”, or, sociology that addresses the public needs and goes beyond the “simple” publication in scientific journals but rather immerses itself into its research subject (society and its problems) and implements its scientific findings in the “filed” so to start positive changes in the society.

The drama-action model itself is based on sociology of knowledge and theory of social construction of reality by Berger and Luckmann; the definition of social stigma and dramaturgical analysis by Erving Goffman; and on the theatre based, contemporary rite of passage developed by anthropologist Victor Turner. It uses Turner’s three stages of rite of passage and builds on the aforementioned theoretical framework by using a combination of various drama practitioners approaches (Boal, Schechner, Strasberg, Chaikin, Bogart etc) and Kurt Lewin’s action research process to achieve educational, research, artistic/cultural goals. As each drama-action model based workshop ends with a public performance, this tool is also useful as means for advocacy or specific positive social actions or for raising visibility and awareness among the general public.

1. Separation stage
In this stage, the participants are invited to leave behind their everyday roles and social reality and to embrace a new, alternative social reality of symbolic theatre (freedom from roles, critical thinking and intense interaction). This is done by using either heightened physical activity (e.g. ice-breakers, group dynamics exercises, drama practitioner’s exercises) or through meditation and relaxation.

2. Transformation or liminiod stage
In the second and the longest stage, the participants take up their new roles and explore the new, alternative reality. They exchange roles and explore themselves, others, the venue of the workshop and the subject they wish to explore (social problem). To achieve that, the participants use various drama practitioners’ exercises for developing group dynamics, imagination and visualization.

They also use the participatory action research process, so to stay focused on the goal (defining positive actions that help us overcome social or personal issues such as discrimination, prejudice, stigmatization etc.). That process follows the basic action research spiral:
a. Action research spiral:
i. Reflect
ii. Plan
iii. Act
iv. Observe/Reflect
This is a dialectic, “never-ending” spiral of redefining knowledge and positive actions.
Those actions are then acted upon and participants use them to build their public performance in which they will show their positive actions (actions that help overcome specific social isseus).

3. Re-incorporation stage
In the last stage, the participants are symbolically reunited with their everyday roles and social reality – but now after being “enriched” for the learning and interaction process of drama-action.
Here is where a circle is formed and participants share their experiences, assess the good and the bad and plan their future “actions” (that lead to the final performance). This discussion takes for of a focus group (with moderators) but it can also include various drama practitioners exercises (e.g. for stage presence, voice) and exercises in public speaking/debating.

This process is repeated every day of the workshop and, in our experience, the workshop of 5 days is enough for participants to build enough materials and to get encouragement (and concrete acting and drama knowledge) from the organisers to feel confident and ready to perform in front of a live audience. Of course, a longer and more intense process helps participants learn more and develop their skills and performance better.

There is no obligatory materials or resources that need to be used.

Drama-action model based educational workshop, much like Turner’s symbolic theatre can be held at any place (theatre hall, classroom, meadow) – as long as the participants agree that the space they are using symbolises the values of symbolic theatre.

However, it is advisable to have a flipchart and markers (or at least some papers and post-id papers) - so that the solutions that participants provide don’t get forgotten and the group can build on their work.

It can also be useful to have various items that can help participants “transform” into their new role (e.g. clothes, wigs, masks etc.), but the workshop can be held just fine without those items.

If the purpose of using drama-action model is scientific research, then the process should be recorded with a camera.
The same goes for the final performance – since the video recording helps raise awareness and disseminate the results of your activity to a larger (wider) audience.

1. Knowing how to build your own educational workshop based on drama-action
2. Knowing at least 10 exercises that are useful in the process of drama-action workshop
3. Understanding the importance of a holistic approach for achieving positive social actions/changes. Or, understanding that your educational process should involve scientific background, research, (non)formal education and performative arts.

Each drama-action model based workshop, including the one on which this Educathe+ Manual is based on, undergoes research and evaluation. In order to capture the potential effects of the activity, the participants undergo pre-activity survey and post-activity survey. Their insight is presented in the Educathe+ Manual, as an integral part of sharing the experience of drama-action model workshop.

Drama-action model is a framework that you can fill with various other activities.
You can mold it to your educational, research, civic activism, artistic or cultural goals.

C1 Manual_Educathe+ Educational theatre as the place for raising inclusion and employability of people with disability.pdf
Tool Fair upload:
- - - NO - - -
Rating:
0
No votes yet
Share this tool by
Add a new version of this toolTranslate this tool 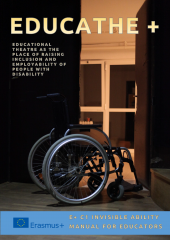 Ideally, drama-action model always includes participants from both “sides” of a social issue (e.g. people with disability and those who discriminate them; migrants and racist etc.).

Participants can be of any age, gender or cultural background but, if drama-action model is used as a research – it is advisable to obtain written consent of parents or legal guardians for participants who are 16 years of age or less.

It is on the organisers to explore the target group they wish to address and to find their opposite.
By mixing the two “sides” of the issue, an democratic and sustainable solutions can be found and, as our research has shown, intensive mixed interactions that are goal oriented (production of a public performance) helps participants to cross social boundaries, empower themselves and start social inclusion.

The concrete learning or educational objectives are:
1. To describe drama-action model in a manner that others can reproduce
2. To provide those who are interested with a few exercises that can be used in each of the three stages of drama-action process
3. To expand educators knowledge and open them to the use of drama-action (or drama, theatre) in their non-formal or formal educational work.

The tool was created by
Ivan Hromatko
in the context of (background):

Firstly, the drama-action model was developed by sociologist dr.sc. Ivan Hromatko for his PhD.
Since his intention was to use drama-action model to achieve positive social results, outside of the science community, he and other enthusiasts founded an NGO called Association for prevention of stigmatization and education through theatre.

After two years of developing the model, the first international workshop based on this model was held in 2013.
Even though drama-action model is suitable for working with any marginalized or stigmatized group, this workshop was specifically designed for people with disability and educators who work with that population.

The participants were amazed at the positive effects it had on them and wanted to bring drama-action model to their own countries and organisations. Hence, a partnership was formed and in 2015, the project got funded as an Erasmus+ KA2 strategic partnership “Educational theatre as the place for raising inclusion and employability of people with disability” (acronym: Educathe+). During the partnership (2015-2017), each of eight partners organised their own version of a workshop based on drama-action model and each workshop produced an Educathe+ Manual – so that other educators and all those interested could use our experience and build their own workshops based on drama-action model.